Running is easy, right? Lace up some shoes and go! It’s just like walking, but faster! (Or as a colleague quipped, falling forward but catching yourself, repeatedly.) Not so much. Thankfully, there are people who can help.

As I mentioned a few weeks ago, I recently worked with Rose Physical Therapy on a run gait analysis. This is a significant upgrade from what some shoe stores offer (namely watching you run for 30 seconds on a treadmill and recommending some shoes to buy). For starters, the run gait analysis at Rose PT is conducted by a doctor of physical therapy who has had special training in kinesiology. It also lasts about an hour and includes homework.

But I’m getting ahead of myself (and as I learned during my analysis, this is a tendency). The session began not with running, not with walking, but with examining my shoes. How was I wearing down the tread? Answer: not much, since these were new shoes. (Oops.) Rachel, the physical therapist, then asked me about my running history, injuries, recent pains, etc. I’ve been working with her for over two years, so she knows most of this, but it was a good refresher for both of us. She then had me do a quick functional movement screen – single leg balances and hops, toe touches, etc. I was pleased to see that my pilates work over the past few months has paid off–no more wobbles!

Next came the sensors. Ok, technically they were colored stickers, but they played a key role in analyzing my stride. Rachel filmed me from various angles while running, then used a motion analysis program to draw lines between the stickers and understand what my body was doing. For example, the angles between these lines could indicate if my hips were dropping side to side (indicating weak glutes…and possibly future knee or hip injuries), pronating or supinating feet, over-striding, under-rotating, etc. (Yes, there really are so many things that can go wrong!) 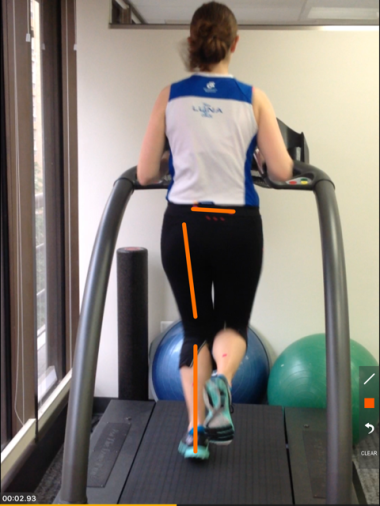 In my case, there was some good news and future good news. The good: unlike the first time she had analyzed my run two years ago, my glutes have gotten stronger (yay pilates!) and my hips stay fairly level when I run. I also have a pretty neutral foot strike. The future good news: I’m losing a lot of potential speed by over-striding. My feet are landing in front of my body, my cadence is slow, I’m leaning back slightly, and my quads and calves (rather than glutes) are doing most of the work.

Luckily, all of this is fixable if I focus on it. Rachel gave me three drills to improve turnover speed, glute (tush?) push, and landing below my body.

So now that I’ve been practicing these skills for about a month, what has been the result? Once I got over the novelty, it has been pretty great. My aerobic running pace has dropped about :30/mile. However, there’s a slight caveat: especially in hot weather, my heart rate is significantly higher when running with this faster cadence. My rate of perceived effort is still low, so I don’t worry about it, but it’s worth noting. One of the coaches at camp likened it to spinning a bike with a higher cadence but lower gear — heart rate might be slightly higher but it’s still easier on the body than grinding out a hard gear at low RPMs. I’ve found two useful visuals for running to be “legs = pistons” (i.e., they push down/back behind me, not reach in front) and “hips over toes, shoulders over hips” (to remember to lean forward, but not by bending at the waist).

Overall, the run analysis was a great experience, and I look forward to seeing what happens to my speed once I’ve had some more time to practice. Thanks, Rose PT!

One thought on “Week 26: Here Comes the Hot Stepper”