Note: This post should have been written way back in April, but I ran out of time. Lucky for you, I have jury duty today so am spending the waiting time catching up on blog posts. Get ready!

While DC folk often criticize Virginia as a place of suburban sprawl, pickup trucks bearing Confederate flags, and lack of bike lanes, sometimes the commonwealth will surprise you. Take, for instance, the Virginia Capital Trail, which runs 52 miles between Richmond and Jamestown. Yes, really. And not “let’s call it a trail but really it’s some busy roads with sharrows or sidewalks”–an actual, off-road, completely paved trail, with mile markers, maps and historic landmarks.

I first read about the trail in the Washington Post, and added it to my mental roster of long ride destinations. April turned out to be the perfect opportunity, as Elliott was returning from coaching a rowing camp in South Carolina and our house was rented out via AirBnB so I had to do a long ride/not from home/in the direction of South Carolina to meet up with Elliott. I don’t like riding my bike for long distances on roads by myself, given how many of my friends have been hit by cars. But an off-road bike path through small towns where I could resupply or get help if needed–yes, please!

Logistical note: if you aren’t staying in downtown Richmond (as I was not), there are several parking options. I played it safe and parked in a residential neighborhood about a mile away. Poor decision: it turned out to be an uphill trek back to the car and I couldn’t remember where I had parked, so the otherwise awesome trip had a rough ending. Use the parking lots by the river. They are free and shouldn’t be full if you leave by 9 AM.

The route starts along the James River (you may recognize it from Zwift), then has a few rollers before flattening out for most the route. I saw a lot of people on tri bikes and a handful of families or pedestrians, but the path was mostly clear–none of the frustrating dodging of rollerbladers or unleashed dogs that we usually battle on DC bike paths. The path crossed trafficked roads maybe a half dozen times at well marked intersections and cars were either absent or quite courteous. 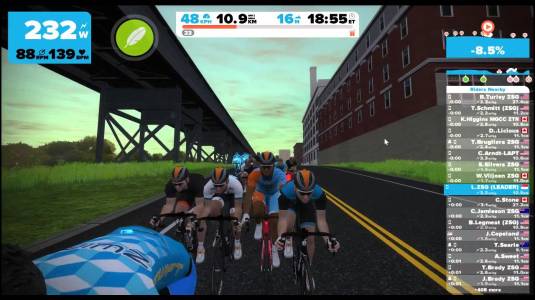 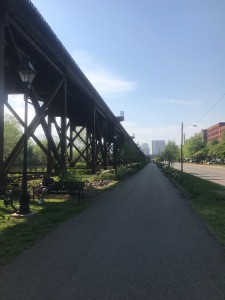 Since this was April, I was still ramping up my training and hadn’t done more than about 90 minutes on the bike at a time, so this 104+ mile round trip ride would be a bit of a step up. Let’s say I was quite hungry and ready to be off the bike when I neared Jamestown. I started fantasizing about the lunch I’d get–maybe there would be a cute historic tavern I could visit, or relax in the shade of a city park. Call it hunger-induced delirium or just bad historical knowledge, but I had forgotten that Jamestown was an abandoned settlement. Not an actual town. (I probably mixed it up with Williamsburg.) So at the end of the bike path, I was greeted by…a mile marker. No ticker tape. No ice cold lemonade. Just a mile marker. And a parking lot. Parking lot? Parking lots bring cars, which bring humans, who need food! History lesson #2: while Jamestown is officially abandoned of residents, it’s still a large tourist attraction. I gleefully and gratefully used the museum’s cafeteria, bathroom, and air conditioning.

Eventually, I knew it was time to begin my return journey. Oh, but what’s this other road? There was a quiet street leading to the island where the actual settlement had been. Well, since I’m all the way out here… This was well worth the detour–easily bikeable, shaded, great views from all sides, and an additional visitor center with bathrooms, water fountains, and a/c to top off on the essentials before heading back to Richmond. 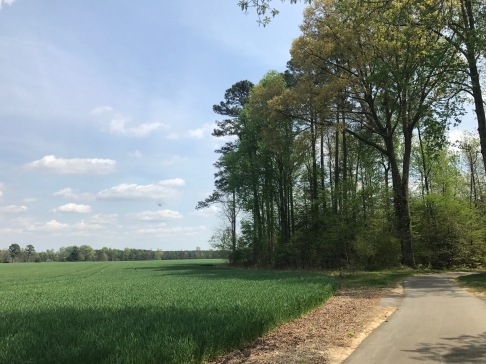 By midway on the return trip, the fatigue was getting to me. I haven’t had my road bike professionally fitted, and that became increasingly apparent as my back and shoulders became sore and stiff. Plus, even on relatively flat roads at a low heart rate, this was a much longer ride than I had trained for. Time to start Operation: Treat YoSelf.

See a gas station? Stop for some snax! Pass a comfy bench in the shade? Lay down for a bit! Find a city park covered in wildflowers with a live bluegrass band playing outside? Time for a nap! (a short-lived nap, thanks to some local ants) Bored? Shove your iPhone in your cleavage and turn the music up! Soon enough, I was back in Richmond (and eventually back at the car), staggering around a grocery store to recoup some major calories.

All in all, it was a great route and I look forward to doing it again!

One thought on “Heat with a Side of History”