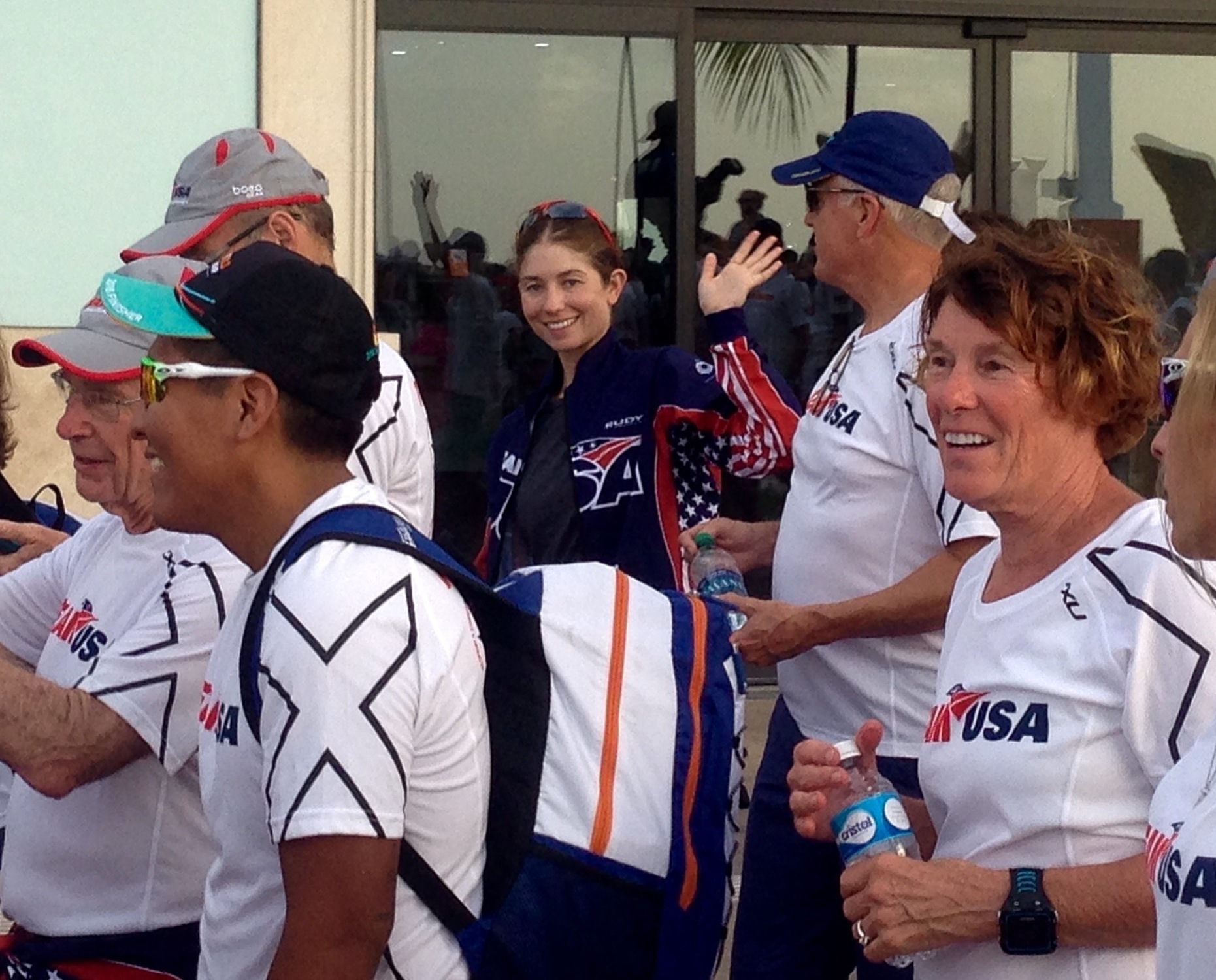 As you may recall from last week’s cliffhanger, I had just learned that while the qualifier for aquathlon worlds was a 1500 meter swim + 10 K run, the actual event in Cozumel was a 2.5 K run (approximately a mile and a half), 1000 meter swim, and then another 2.5 K run. Oh boy, a much faster race, in a totally new format. Nothing like traveling 1400 miles for a 45 minute race!

But really, it was totally worth it. For starters, Cozumel is gorgeous. It’s an island (Mexico’s third largest!) off the coast of Cancun on the Yucatan Peninsula, and home to the largest coral reef in the Americas. We flew into Cancun, then took a bus and ferry to Cozumel, arriving in the early afternoon. Not only was our hotel comfortable and clean, our room had a hammock and was just two blocks from a grocery store and delicious taquería. 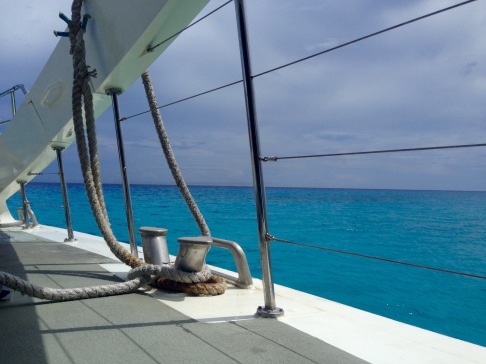 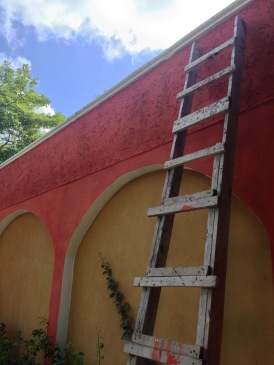 The downside of being in the Caribbean during the summer? Hot. So hot. And humid. So very, very humid. Even a short shakeout run on Tuesday turned me into a puddle of sweat and “What do you mean the hotel is out of bottled water?!” tears. Thankfully, my globetrotting friend Kendra texted me with some advice.

Tuesday afternoon, I attended the Team USA race briefing at another hotel across town. Unlike Ironman-branded world championships, ITU worlds are very much a team sport. All participants must qualify per their country’s rules (in our case, USAT Nationals), wear the team uniform, etc. Since Team USA typically sends a lot of people to this race (up to 15 per age group), we have an incredible support crew: coaches, doctors, bike mechanics, massage therapists, etc. (Team USA also partners with a travel agency to book rooms at a host hotel, handle ground transportation, etc. I took advantage of this for Sweden, since the race was in a small town with limited hotels, but we DIY’d it this time.) The aquathlon briefing covered the race format (no one else seemed surprised about the distances), rules and penalties (messy transition area = :10 penalty, and timing starts when you stop arguing with the referee so don’t bother), and where the coaches would stand near the finish so we could grab an American flag (but if we were sprinting against a Canadian, Brit, Aussie, or Kiwi, skip the flag and we get two if we win). Afterward, I asked one of the coaches about the parade uniform, and explained that I had brought last year’s gear since it was supposedly the same. Answer: umm not really, but not worth worrying about at this point.

Next, Elliott and I hopped on the moped (yes, really–they are extremely popular on the island) and headed south to the practice swim. This had been a last-minute addition to the schedule (thank you, Team USA, for alerting us!), and I was very glad I did it. Why? Not the crystal-blue water, the respite from the sweltering heat, previewing the course, or the chance to swim amidst a school of tropical fish. It’s because my goggles started to leak immediately and would not stop, despite multiple adjustments. I finished the 1000 meter course to prove to myself that I could do it nearly blind, then returned to my backpack, fished out a backup pair, and tried again. Success! See, I can manage logistics after all! 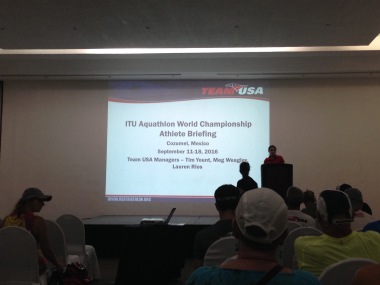 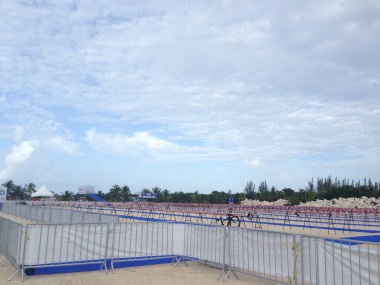 The next morning, bright and early, we moped-ed back to the race course. Setting up transition was so odd–no bike to rack, and my cap and goggles went into the bin for the second leg of my race. (My original plan of running in the cap and goggles to save time was quickly dashed by the searing heat and the fact my age group wore black caps–yes, seriously. Who does that?!) And then we waited. I did a quick “warm up” run (not necessary–already plenty warm!) then settled under my shade umbrella to watch the races before mine. There were a lot. First, male pros & U23s, female pros & U23s, paratriathletes, and then pretty much every age group before mine–nearly two hours to wait. Still, it was pretty incredible to watch the pros race. Recent Olympic gold medalist Alistair Brownlee won, and American Tommy Zaferes had an awesome race, finishing third. On the women’s side, there were a bunch of Russians in the race (perhaps they were banned from the Olympics?) and they all received time penalties for missing the pre-race briefings (but still managed to sweep the podium). I’m sure there’s a lesson in there somewhere.

Finally, it was my turn to race. I chatted with some other athletes and asked when they had realized it was a run-swim-run format. “Umm, a year ago?” was the general reply. Well then. (Apparently, while the run-swim-run format is the official standard, it only happens if the swim does not require a wetsuit, so when races take place in colder climates–as they have in recent years–it’s only a swim-run. That said, it’s always a 1K swim, 5 K run; only the Americans do it differently at nationals.)

The starting horn blasted, and people took off running. I’ve never been in a race this short before, so it was strange to feel compelled to run so fast from the get go–especially in this heat and humidity. Coach Mary’s instructions for the race were to (metaphorically) replace my head with a cabbage–no thinking allowed. Just go. No doubts, no worries, no wondering if I was going to implode or whether my goggles would leak or if I’d get passed by two women in my age group in the finish chute like last year. Let my body do what I have trained it to do. And I (mostly) did. My brain had to turn on briefly to figure out the water stations (we were handed sealed bags of it), and to focus on very neatly putting my shoes and sunglasses in the transition bin, while putting on my cap and goggles as I ran toward the water and dove off the dock. The goggles stayed sealed, and I was treated to an underwater menagerie of fishes, coral, and SCUBA divers. It was absolutely gorgeous, but now was not the time to play Jacques Cousteau–I had people to catch. And I did. It was a great swim, in which I passed a lot of people, and was sad to hit the last turn buoy and head back to  steamy, humid land. The second run felt better than the first, since I had cooled off on the swim and could tap into my season of training for longer events–hello, endurance! I passed more people, trading places a few times with a British woman. Finally, it came down to the final quarter mile. Would this be a sprint finish? How badly did she want this? How badly did I want this? I decided that if we sprinted and I gave everything I had and still lost, that would be ok. But if I lost my nerve and didn’t try, then I’d kick myself later. So I kept pushing. As I rounded the final corner into the finish chute, I saw the Team USA coach. “She’s right behind you!” he yelled, as I grabbed the flag. I sprinted faster. I heard the crowed get louder–this must be a close race. I didn’t look back until I had crossed the line, and saw my competitor finish a few steps behind me. 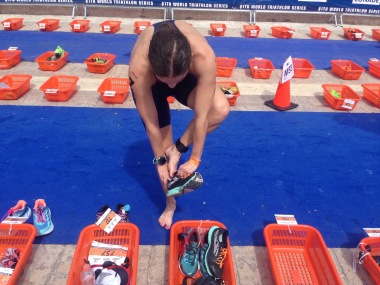 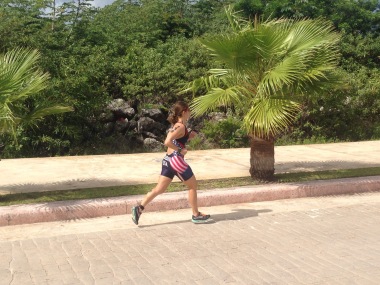 The next few hours were a whir of cold fluids (consuming and bathing in), receiving a finisher medal that could give someone a black eye, texting family/friends/colleagues that I had indeed survived, checking for results (not posted), gathering my gear, and heading back to the hotel. Since we were flying back to DC the next morning, we took advantage of our last day in Cozumel by snorkeling at the Punta Sur eco-park. Not only did we see colorful fish and coral, we made some friends.

But there was still one more exciting event on the agenda: the Parade of Nations. Yes, really. Picture a mini Olympics opening ceremonies, where athletes aged 16-86 wear their team’s official parade uniform (or in my case, the 2015 version) and march around the host town amidst cheering crowds, culminating in some speeches by local officials. My friend and former LUNA Chix teammate, Sarah Wassner Flynn, had arrived that morning so we experienced the parade together. It was incredible to walk through Cozumel, amidst streets lined with cheering spectators, yelling “USA! USA!” and realizing they were cheering for us. People took photos of us as we walked past, like we were celebrities (maybe because I was standing near “Iron Nun” Madonna Buder, competing in the 85-89 age group, who is a legit celebrity). There were Mayan dancers, a mariachi band, and actual ticker tape. Well done, Mexico. 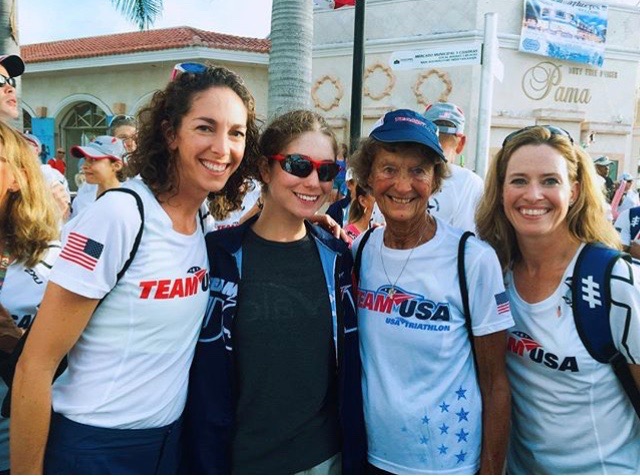 Alas, the parade wound down, we motor-scooted off to dinner, and then returned to the hotel to pack. The next morning, we returned to DC. In a few weeks, I will race USAT Aquathlon Nationals to qualify for worlds next year–this time, in British Columbia. Let’s hope I order the uniform in time (and study the race distances).

Ps–By this point, you are probably partially eager to hear how I placed, but also partially indifferent since some time has passed and it really doesn’t matter. Welcome to my world. Later that night, the results were finally posted online–12th in my age group. I’ll take it!