We finally got the big gender reveal on Moose this week. And while we did not celebrate with a cake, the event was not without some drama.

On Tuesday, Elliott took Moose to the Humane Society clinic for a basic check up and to find out if the cat was is male, female, spayed/neutered, approximate age, etc. Answers: female, approximately 1.5 years old, and very squirmy. Also no evidence of spaying since there’s usually a scar or tattoo. (These last two sentences were important; note the wording.)

So on Thursday, Elliott took Moose back to the Humane Society to get spayed and microchipped. She wasn’t allowed to eat for 12 hours prior, poor kitty. Also, due to her hanger and being smart enough to associate the cat carrier with the vet, it took Elliott about 45 minutes to try to get her into the carrier and eventually trapped her in a box instead. She then proceeded to nearly escape the box while in the car, which sounded hilarious to me afterward but probably was no fun at the time for either party.
Since Elliott was coaching that evening, it was my job to leave work at a reasonable hour and pick up Moose before the vet closed at 5:30. Well, that was harder than anticipated, and I wound up sprinting down the street to the vet at 5:29, lamenting that I was already failing as a pet parent. Thankfully, the clinic was still open.  The staffer handed me the paperwork and explained that Moose would need to wear a cone for 7-10 days, avoid jumping (umm good luck), and not eat more than a handful of food until Friday. Ugh. Also, since the carrier is too small for cat + cone, I would have to do that myself at home. Oh goody. (When I asked how to keep the cat from hating me for making her wear a cone, the staffer said I should decorate the cone to look like a flower or put some heart stickers on it for Valentine’s day. I asked why the cat would hate me less for that; she said it was more so I’d feel better despite having a grumpy cat.)
There are plenty of videos on the internet about cats in cones (including mine, now). In fact, the hashtag #catsondrugs is particularly popular. There’s a reason for this. They are hilarious. Over the course of the evening, Moose went from high as a kite to stumbling blindly to stoned out of her mind. However, she did have enough wits about her to escape the cone with remarkable speed. Several times. We tried the tighter notch (which the vet had originally suggested) but she acted like she was choking (drama queen?) so we relented and loosened it–which lasted less than a minute until she was free.
I pulled out the paperwork to find the vet’s contact info to email and ask about preventing cone escape. Then I noticed “reason for decline–already spayed.” Then on the other form, “ABS (already been spayed)–scar and tattoo present.” So…no surgery. No scar. No need for a cone. Did the staffer who gave me the instructions not read the paperwork? (Not to my credit, neither had I, since I was so rushed.)
How did this happen? From what I can figure out, the verdict of “not spayed” on Tuesday was actually “too squirmy to tell” but then when she was under anesthesia, the vet saw the scar before cutting her open again. They supposedly inserted a microchip so I guess it wasn’t a total waste. (And the spay was free because I live EOTR–kitty scholarship!)
So upon realizing this, we put the cone in the closet (no wound to protect!) and gave her a big bowl of food. She was still pretty out of it and just drunkenly circled the bowl like a stoned college student.
There you go, 600+ words about my cat. What has happened to me???
In other news…
Swim: Still plodding along like a toddler in the water, relearning how to move. But it’s starting to feel smoother and I’m certainly not complaining that my shoulders *don’t* hurt after each swim. What a concept!
Bike: Lots of quality time on Zwift, since it’s currently 0 degrees with windchill outside. The creators of this game definitely know how to appeal to Type A cyclists, including lots of Strava segments for extra bragging rights. I still mostly ignore it and watch my stories on Netflix. This week was a documentary about Antarctica, which made me feel very cozy in my basement, with only a light dusting of snow outside.
Run: Up to THIRTY MINUTES at a time! I even cracked into double digits for the week!!! (10.1 miles, to be exact) My coach keeps saying that soon the mileage will increase, so maybe I’ll look back wistfully at all these short sessions.
Other: Between flex Friday and Presidents’ Day, it’s a long weekend for me. I picked some fun cookbooks from the library, which also inspired a trip to the Latin grocery for dried fish, stocking up on butter and sugar, and harvesting salad from the greenhouse (three separate recipes). 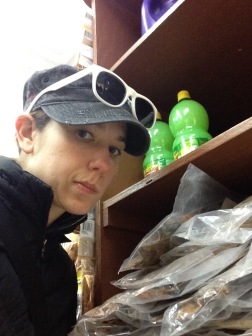