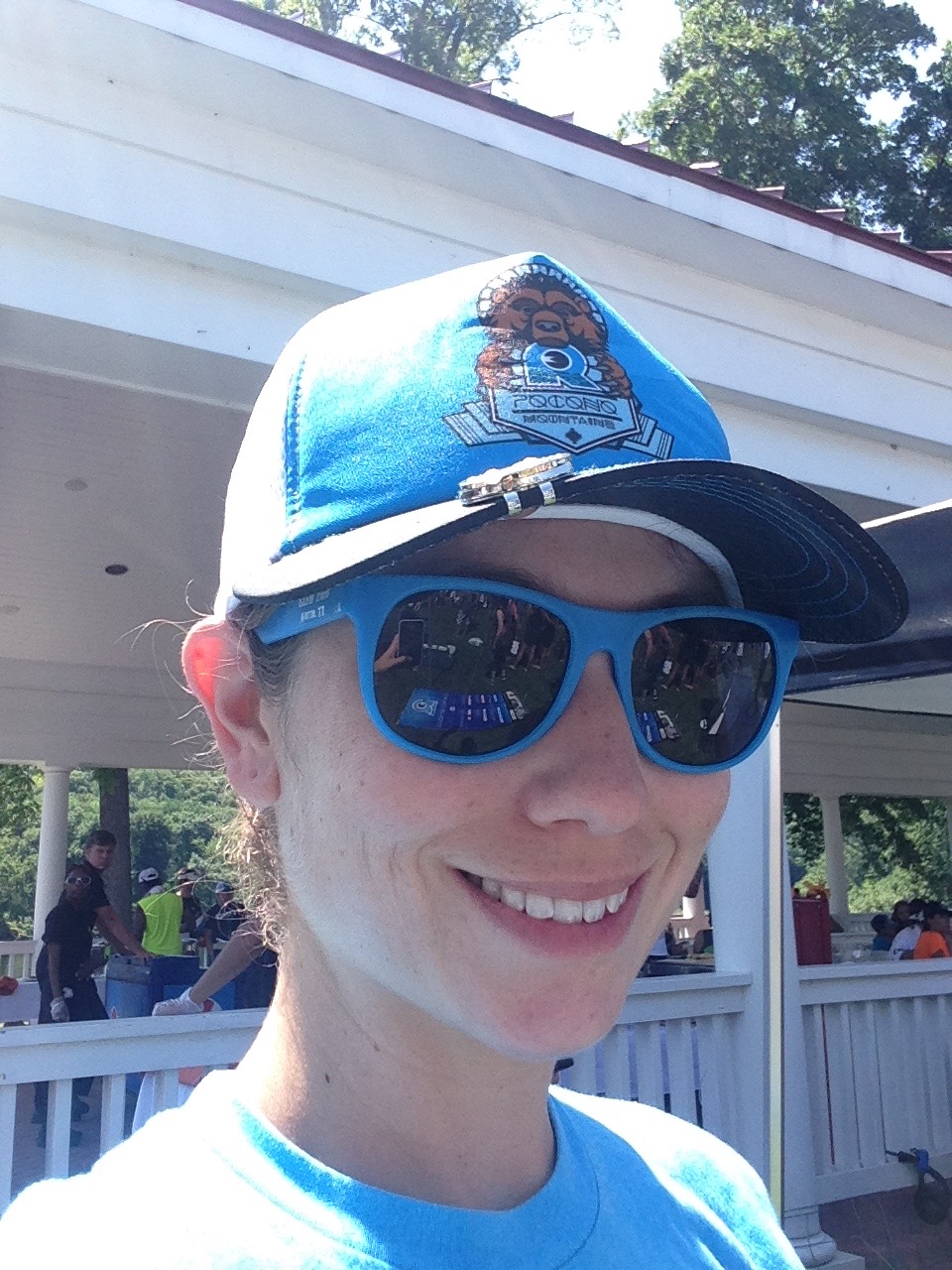 That’s how I had always heard of the Poconos – place of moderately priced romantic getaways for the NYC-based characters on the TV sitcoms I watched as a kid. But it turns out there’s more to the area than that. Think microbreweries, the second oldest continually-operated bookstore in the world, hiking trails, and a Wegmans every few miles.

It’s also the home of Rev 3 Pocono Mountains. I was signed up to do the half iron version of this race last year but came down with a nasty ear infection a few days prior. The good folks at Rev 3 allowed me to defer to 2016 for just $50, rather than losing my full entry fee. So this was to be the year of finally tackling the course…except my coach and I decided to play it safe with my piriformis issue and just do the olympic distance…aquabike. Yes, that’s right, just a 1500 meter swim and 24 mile bike ride for me. Was it worth it? Ultimately and unexpectedly, yes.

But first, the logistics. Ah, the logistics. There’s nothing like traveling solo to a race to remind me how much easier the aquathlon is. Something about the bike just makes all the logistics more stressful. I had booked the hotel room awhile back, before learning about hotels.com so I was staying at a Marriott 45 minutes away from the race – not ideal but near some convenient food options. While rolling my bike to the car on Saturday morning, I noticed the back wheel was rubbing on the brake and decided to get it checked out by the bike mechanic at check-in. Surprise – the mechanics were not free and did not take credit cards. Plus, since the race was at a resort in the middle of the national park, it’s not like there was a plethora of ATMs nearby. Fine, I’ll fix it myself. And I did. The bike check-in/T1 was down the road from packet pickup/T2/finish, so I then headed down there to park, pre-ride the bike course, and rack my bike. Easy, right? Well, it turns out the T1 parking area had a $10 entrance fee (also cash only). By the way, neither this nor the mechanic fees were mentioned in the athlete guide. So frustrating! I explained to the employee that I was just there to drop off my bike, and she said that was fine, as long as I wasn’t parking and hanging out. Ok, fine, whatever. I parked, headed out on my bike, and immediately noticed a rattling noise. Ugh, what now? Nothing looked wrong with the bike, but the noise was constant. What if the back wheel isn’t really attached? What if the derailleur is about to fall off? And something must actually be really wrong, because these hills are way more difficult than they should be! I stopped about five miles in, turned around, returned to my car, returned to the T2/check-in spot, found an ATM, dropped off my bike, and was told it would be about 30-40 minutes. I killed some time at the expo and wound up buying a new race helmet and Garmin since the sales were incredible. A thunderstorm came and went. My cell phone battery died. There was no water so I was thirsty and grumpy. Finally, 90 minutes later, my bike was done. And what was wrong with it? Nothing. They couldn’t find a single thing wrong with it. Apparently the rattling was the result of the roughly paved road. Oh boy. Great. But at least I don’t have to worry about it. Back to T1, re-reassuring that I was just there to drop off a bike, did a quick ride with the new helmet, racked it, and left. Finally. Just in time to get caught in standstill traffic back to the hotel. All in all, check-in took nearly seven hours, including driving time.

By contrast, race day was quite smooth. I swam, I ran the 1/3 mile to T1, biked, yelled at dudes who crossed the yellow line when passing, biked some more, got splashed in the face by my water bottle because the dishwasher ate the lid and the replacement part was delivered to my house after I had departed for the trip, held my aero bottle straw in my teeth (and then down my bra) because it almost came out during a bumpy descent, and pondered at why my watch kept beeping every 500 meters or so (answer: it was still in swim mode). But soon enough, it was over. Even though I had been in the last wave of the day, my race was shorter than most, so I got to hang out in the finish area with Cameron Dye and the other pros with free local beer and NormaTec boots. Not going to complain about that!

I wound up placing first among the women and second overall for aquabike. Not a bad day! But by that point, the podium was just a nice bonus. My larger win from the weekend was gaining the confidence that even when injured, traveling alone, and facing a lot of frustrations, I didn’t let it drag me down come race day. I was able to focus on the things I could control and tell myself I’d worry about the other stuff later. (The beeping watch, for example, would have sent me into a rage last year; this year, I realized that I didn’t even know how to turn off the watch since it was so new, laughed about how this is why one doesn’t try new stuff at races, and reframed it my mind as “well now I don’t need to tell people I’m passing; they’ll just hear my watch!”) Major kudos to Coach Mary for getting me to that point mentally.

Next up: ITU Aquathlon Worlds in September!

One thought on “Week 32: In the Land of Heart-Shaped Jacuzzis”